The Palace of Versailles was the principal royal residence of France from 1682 under Louis XIV until the start of the French Revolution in 1789 under Louis XVI. It is located in the department of Yvelines, in the region of Île-de-France, about 20 kilometres (12 miles) southwest of the centre of Paris.

The palace is now a Monument historique and UNESCO World Heritage site, notable especially for the ceremonial Hall of Mirrors, the jewel-like Royal Opera, and the royal apartments; for the more intimate royal residences, the Grand Trianon and Petit Trianon located within the park; the small rustic Hameau (Hamlet) created for Marie Antoinette; and the vast Gardens of Versailles with fountains, canals, and geometric flower beds and groves, laid out by André le Nôtre. The Palace was stripped of all its furnishings after the French Revolution, but many pieces have been returned and many of the palace rooms have been restored.

In 2017 the Palace of Versailles received 7,700,000 visitors, making it the second-most visited monument in the Île-de-Franceregion, just behind the Louvre and ahead of the Eiffel Tower.

The Palace of Versailles offers a visual history of French architecture from the 17th century to the end of the 18th century. It began with the original château, with the brick and stone and sloping slate mansard roofs of the Louis XIII style used by architect Philibert Le Roy. It then became grander and more monumental, with the addition of the colonnades and flat roofs of the new royal apartments in the French classical or Louis XIV style, as designed by Louis Le Vau and later Jules Hardouin-Mansart. It concluded in the lighter and more graceful neoclassical Louis XVI style of the Petit Trianon, completed by Ange-Jacques Gabriel in 1768.

The palace was largely completed by the death of Louis XIV in 1715. The eastern facing palace has a U-shaped layout, with the corps de logis and symmetrical advancing secondary wings terminating with the Dufour Pavilion on the south and the Gabriel Pavilion to the north, creating an expansive cour d’honneur known as the Royal Court (Cour Royale). Flanking the Royal Court are two enormous asymmetrical wings that result in a facade of 402 metres (1,319 ft) in length. Encompassing 67,000 square metres (721,182 sq ft) the palace has 700 rooms, more than 2,000 windows, 1,250 fireplaces and 67 staircases

Some art historians now call the style of the Louvre and Versailles “French classicism.” They possess somewhat different features than Italian baroque architecture, including the emphasis on symbols of power and timeless domination. Other types of baroque ar

The site of the Palace was first occupied by a small village and church, surrounded by forests filled with abundant game. It was owned by the Gondi family and the priory of Saint Julian. King Henry IV went hunting there in 1589, and returned in 1604 and 1609, staying in the village inn. His son, the future Louis XIII, came on his own hunting trip there in 1607. After he became King in 1610, Louis XIII returned to the village, bought some land, and in 1623-24 built a modest two-story hunting lodge the site of the current marble courtyard. He was staying there in November 1630 during the event known as the Day of the Dupes, when the enemies of the King’s chief minister, Cardinal Richelieu, aided by the King’s mother, Marie de’ Medici, tried to take over the government. The King defeated the plot and sent his mother into exile.

After this event, Louis XIII decided to make his hunting lodge at Versailles into a château. The King purchased the surrounding territory from the Gondi family, and in 1631–1634 had the architect Philibert Le Roy replace the hunting lodge with a château of brick and stone with classical pilasters in the doric style and high slate-covered roofs, surrounding the courtyard of the original hunting lodge. The gardens and park were also enlarged, laid out by Jacques Boyceau and his nephew, Jacques de Menours (1591–1637), and reached essentially the size they have today Versailles after the fall:

After the outbreak of the French Revolution in 1789, King Louis XVI and Queen Marie Antoinette would be stripped of power, brought to Paris and ultimately beheaded. The palace fell under the control of the new republican government.

Many of its furnishings were sold to help pay for the subsequent Revolutionary Wars. When Napoleon came to power, he had an apartment created for himself in the Grand Trianon, complete with a map room.

King Louis Philippe, in the museum he created, showcased different aspects of French history. The Battles Gallery can still be seen today with its modern-day keepers noting that the gallery’s art depicts every main French battle between the Battle of Tolbiac in A.D. 496 and the Battle of Wagram in 1809.

In the late 19th and 20th centuries, Versailles curators would convert many of the museum areas back into palace space, trying to show how they looked before the French Revolution.

Two more pivotal events would occur at Versailles in this post-revolutionary period. In 1871, after France had lost a war against Prussia, Kaiser Wilhelm I was proclaimed Emperor of Germany in the Hall of Mirrors, adding an extra layer of humiliation to the French defeat. For several years after this defeat, the situation in France was so bad that its Chamber of Deputies and Senate opted to meet at Versailles, rather than Paris, for reasons of safety.

In 1919, France would have its revenge, of sorts, when the Treaty of Versailles, which imposed reparations on Germany, was signed in the same hall. Although the treaty formally ended World War I, it has been argued by some that it helped pave the way for World War II. Even then, centuries after its modest start as a hunting lodge, events still took place at Versailles that ultimately helped shaped the world we live in today. 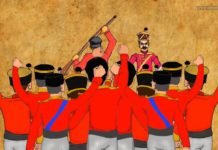