He has a massive fan following down south. Recently, when the actor turned politician had contested for the Lok Sabha elections,

he topped the list of the most searched Indian Celebrity Candidate on Google.

Few Tollywood celebs shared their Opinion About Power Star Pawan Kalyan In an exclusive interview Frankly with TNR on a special show “Talking Movies with iDream”. 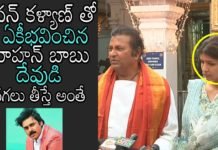