These temples are built around the place where major Hindu deity Krishna is said to have been born.

The place holds religious significance since the 6th century BC. The temples were destroyed multiple times throughout history,

latest by Mughal emperor Aurangzeb in 1670 who erected Eidgah there.

In 20th century, the new temple complex was built with financial help from industrialists containing the Keshavdeva temple,

the Garbha Griha temple at the birth place and the Bhagavata Bhavan. According to Hindu traditions, Krishna was born to Devaki and Vasudeva in a prison cell where they were confined by his maternal uncle Kansa,

a king of Mathura, due to prophecy of his death by the child of Devaki.

According to tradition, a temple dedicated to Krishna was built the birthplace by his great grandson Vajranabh.

The archeological excavations of the site had revealed pottery and terracotta from 6th century BC.

It also produced some Jain sculptures as well as a large Buddhist complex including Yasha Vihara,

a monastery, belonging to Gupta period  Cunningham opined that Hindus may have occupied the former Buddhist site.

The Vaishnava temple may have erected on the place as early as the first century.

Some late 8th century inscriptions mentions donations to the sie by the Rashtrakutas.

Ghazni’s scribe, though not accompanying him on the expedition,

Al Utbi describes in his Tarikh-i-Yamini neighbouring holy town which is identified as Mathura.

He wrote, “In the centre of the city there was a huge and magnificent temple,

Any description of the temple, either in words or in pictures, would fall short and fail to convey its beauty.

” Mahmud of Ghazni wrote, “if any one wished to construct a building equal to it,

he would not be able to do so without spending a hundred million dinars, and the work would occupy two hundred years,

even though the most able and experienced workmen were employed.” He ordered to burn all the temples and demolish them.

He plundered gold and silver idols and carried away a load of hundred camels.

a Vishnu temple which was ‘brilliantly white and touching the clouds’.

Abdullah, in the reign of Mughal emperor Jehangir, mentions in Tarikh-i-Daudi the destruction of Mathura and its temples by Delhi Sultan Sikandar Lodi in 16th century.

Lodi had prohibited Hindus from bathing in the river and shaving of heads on the banks as well.

In the reign of Jehangir, in 1618, Raja Veer Singh Deva Bundela of Orchha had built a temple at the cost of thirty-three lakhs.

A French traveller Tavernier visited Mathura in 1650 and had described the octagonal temple built in red sand stone.

Mughal prince Dara Shikoh had petronised the temple and donated a railing to the temple.

The railing was removed Mathura governor Abdun Nabi Khan on the order of Mughal emperor Aurangzeb and he built Jama mosque on the ruins of the Hindu temples.

During the Jat rebellion in Mathura, Abdul Nabi Khan was killed in 1669.

Aurangzeb attacked Mathura and destroyed that Keshavdeva temple in 1670 and built Shahi Eidgah in its place. 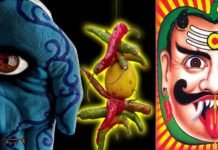 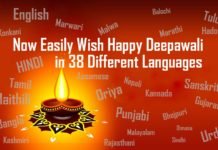 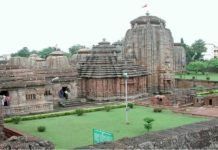